On May 30, 2013, I visited the Mosque of Amr ibn al-As, the first mosque built in Africa. I went along with a few colleagues of mine who were also international students on an internship in Egypt; our internship consisted in visiting different places inside and outside Cairo.

On that day, after walking around the mosque, we sat down to rest and observe our surroundings. There were more men than women sitting around us. Some of them prayed, others read and others slept.

It looked as any other day at one of Cairo´s calm mosques, but it wasn´t.

Young and old men quickly gathered together around an object I could not manage to see. I moved my head in every direction as I curiously wondered what was happening. Even though I was 6 to 8 feet away, I could not see the main action.

“What are they doing?” I thought.

Men moved around constantly as I heard words in Arabic, which I obviously could not understand.

But he was not the only one. He was soon accompanied by others who cried quietly and others who kneeled down crying, as if they were not able to hold their bodies anymore.

A few options started to form in my head. And it was not until I saw various men carry a casket that I understood I had become part of a funeral.

I had never seen or been to a funeral in my life, and although I did not know the deceased person or his or her friends and family members, I felt a piece of their sorrow and loss. My eyes started to tear as I watched in awe all the commotion.

“Coco, let´s move to the side,” said Sujay PS, one of my colleagues.

I forced myself to move away from the funeral because I was so intrigued and moved by the ceremony. Yet as I slowly walked away, I knew I had to capture this moment. I also knew it was disrespectful to take a photo of such a private event, and I could upset people.

But I just held my camera up to my chest, hoped it was straight, and clicked. 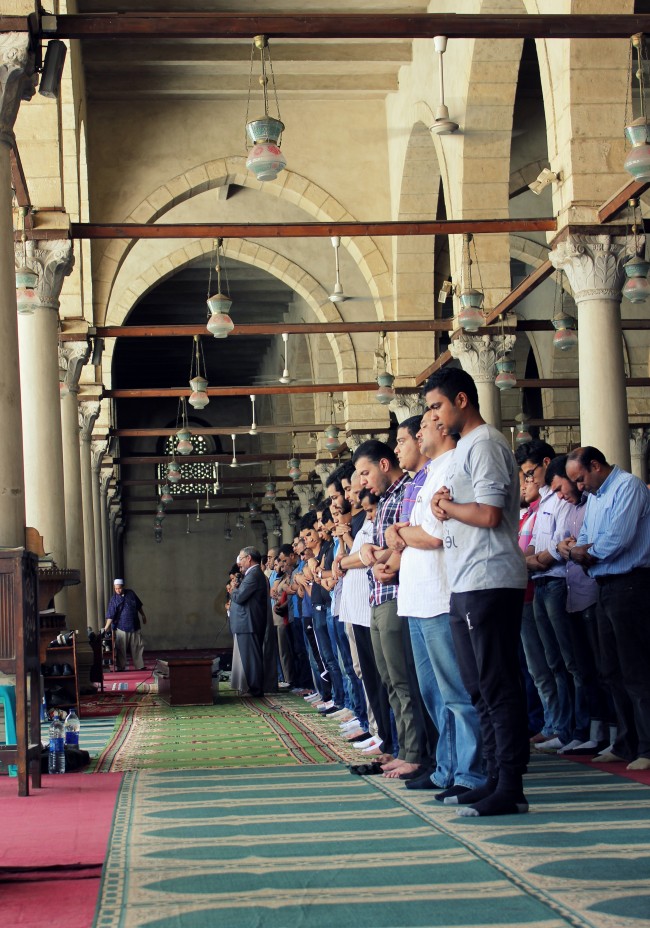 On June 12, 2013, I decided to post the photo on my photography´s Facebook page, Coco´s shoots, with a brief description:

“As I waited for some of my roommates to come back from the women´s area, I sat quietly contemplating the oldest Mosque in Africa, Amr ibn al-As.

The day was quiet and there were several men praying spread out around the mosque.
Then, all of these men got up and walked together as they chanted in Arabic. Men´s faces turned red and were covered by tears. It took me a while to understand and find a big casket in the front of the mass.

Prayers were said and after a few moments of tears and silence, everyone in the group formed perfect horizontal lines, closed his eyes and started chanting Salat al-Janazah , an Islamic funeral prayer.”

A few minutes later, I received an inbox through Facebook from a young Egyptian, Ibrahim Osman, with the link to my photo.

“You took this photo?” he said.

“Why?” I replied nervously.

“This is my best friend´s funeral,” he said.

Goosebumps traveled through my whole body in seconds.

“Shit, now I am really in trouble,” I thought.

But it turned out otherwise. Ibrahim told me he was extremely happy for the photo and thanked me for taking it. He was also nice enough to share with me that his late friend, who he had known since he was 6 years old, was Ahmed Raafat Zidan. Ahmed was 20 years old.

Days later, Ibrahim shared the photo. It did not take long until the photo reached 30 shares on Facebook, and all of them with messages of love toward Ahmed.

Print screen of a few shares on Facebook with messages for Ahmed.

As a photographer, seeing the emotional response that one of my photos created was one of the best experiences I had during my time in Egypt.

One of the things I love about photography is the human connection that a single capture of life´s moments creates. And I am blissful that I was part of this photo human connection.

I hope this won´t be the last one.

Note: Thank you Ibrahim for sharing your time and story with me, as well as everyone who liked and shared the photo. Thank you.

One thought on “A photograph’s connection”